Eternal city, Rome, is also a nice place for beer enthusiasts. I spent four days to visit 15 different place to have nice italian artisan beers. Here is a list of those places starting from the best one. I only went once on each place  and I think that all the places were worth of visit.

1. Open Baladin Roma (Via degli Specchi, 6)
Open Baladin is a very nice beer restaurant to have 40 taps and also large selection of bottles and cans. Here I had the best burger of the trip. Service was very friendly and  you were able to have taste of the beers before choosing. All the beer styles were present and the bar desk and the wall were pleasure for eyes. 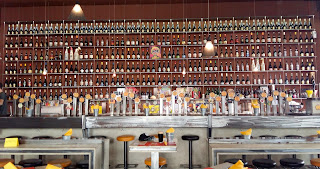 2. Bir & Fud (Via Benedetta, 23)
This was another great beer restaurant to have good food and selection of something like 30 taps. Burger was also good here and pizzas looked amazing. There is a little terrace in front and the bar desk is long ass hell. Good service. Ma Che Siete Venuti A Fà is located opposite side of the street.

Birra+ is really nice urban beer pub. Nine taps and interesting selection of bottles from various countries. Service was professional and bartenders gladly helped with the choices. A cool place to have a few beers before heading for a dinner at Birstro. 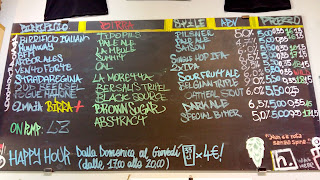 4. Ma Che Siete Venuti A Fà  (Via di Benedetta, 25)
After eating at the Bir and Food I went for dessert beers at a small and noisy pub opposite side of the street. About 15 taps and a very warm atmosphere. Rock music and sport from tv´s. More space at downstairs. I think this is a second living room for most locals. Beer pub at its best. 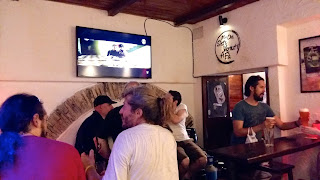 This is a cosy little baquetteria to have delicious breads and artesan beers. A small but good quality bottle selection. Focaccia was baked from spelt and it was really yummy. Great place for lunch if you can fit in. 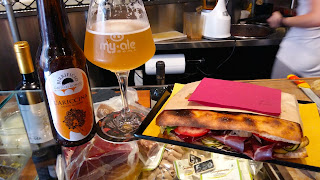 6. Queen Makeda Grand Pub (Via di S. Saba, 11)
Makeda offered selection of 40 taps which were mostly italian. Outer terrace was nice place at hot weather because of the water smog/dust released from the pipes at the roof. Small ”tapas” were available from the conveyor belt. Also whole dishes were available.

7. Birstro (Via Luigi Filippo de Magistris, 66)
Birstro was the only brewery restaurant that I could find and it is located near Birra+. They had four taps with three own beers and one quest. Also one one bottled product was present. Pilsner I had straight from the tank. Beers were nice and also the burger was good. Bartender also gave me a taste of liquore flavored with cascade hops (weird but good). Nice terrace at the street with sunset. Excellent service!

8. Baquetteria del Fico (Via della Fossa, 12)
From a small street you can find a really small baqutteria to have sandwiches, cheeses and meats. Large selection of bottles and nice service. Atmospheric and intimate place that exudes quality.

9. Hopside (Via Francesco Negri, 39)
Hopside is like a big garage with a selection of 8 beers at tap and a versatile food selection (burgers, woks, comfort foods, …). Atmosphere was infernal when Italy beat Spain in football.

10. Il Brigantino (Via di S. Martino Ai Monti, 50)
For a lunch I had the best pizza of the trip here. Very descent selection of bottles but sadly only a few in small bottles. For own it is too much to have 0,75L bottle. A must go to place to have a pizza with good beer.

11. Brasserie 4:20 (Via Portuense, 82)
Along the river you can find an american style beer restaurant to build your own burger and have a beer from almost 20 taps. Quite large terrace at the roof to watch football for example. Also nice selection off belgian lambics and qeuzes. 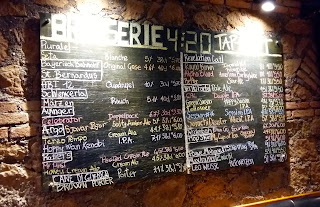 12. Donkey Punch / Nel Buco del Mulo (Via della Scala, 33)
Nice little "street food style" place to have something to eat and have a beer from really small breweries. Place is located near the Bir & Fud and Ma Che Siete Venuti A Fà. 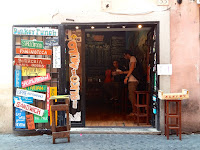 13. Hopifico (Piazza Cesare Baronio, 2)
This seemed like a local corner pub with eight taps and also some food available. Cosy and warm atmosphere.

Beer restaurant with quite global selection of beers and food. Terrace at the outside. A nice place to have food and watch sport from the tv. 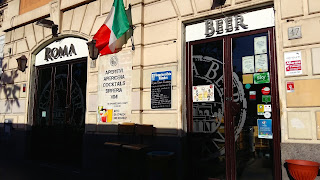 15. Emporio alla Pace (Via Della Pace, 28)
This was more like a corner cafe with descent selection of bottled beers. Nice place to stop for a while when walking in the centrum. Maybe a dessert place after eating at Baquetteria del Fico,

On this Google Maps picture you can can see the top 10 located in the city of Rome. 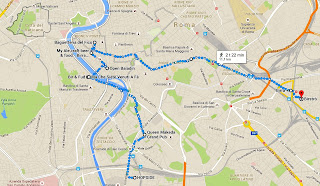 There were also two places that I did not have time to visit but they seemed good places:
No.au (Piazza di Montevecchio, 16)
Mad for Beer (Via Federico Ozanam, 62)